The snow swirled unexpectedly in cold cotton drifts.  The German gods were having some Wagnerian pillow fight in the skies above Munich as Andrew and I took our first steps beyond the hostel wall. In other words perfect beer hall weather!

Before that it was necessary to take the pilgrimage to Europe’s most over rated tourist attraction, the glockenspiel. 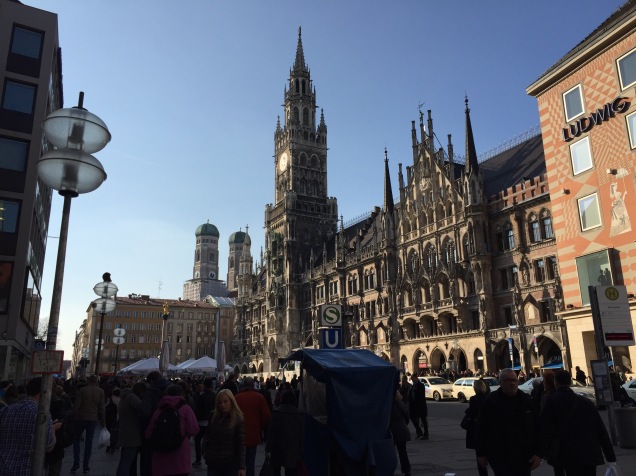 Marienplatz was crowded with tourists all waiting expectedly as this marvel was to unfold above us. The glockenspiel itself placed into the neo-gothic architecture of the nues rathouse (an appropriate name for a building filled with politicians) looked down upon us, it’s mediaeval romantic figures carved from wood standing ready to begin the spectacle. Then at 5pm (well, about 5:07, no auto mechanism here, it’s all reliant on someone climbing to the top and flicking the on switch) the spectacle began. The wooden figures roared into a sudden flurry of slow motion activity, before two Knights one from Baveria and the other from Austria came charging toward one another at what can only be described as a grind of hooves. The bells beating out a tune, completely out of tune, were the perfect accompaniment  to this craptacular display of clockwork. The Bavarian knight triumphant in his victory over the Austrian, it seemed like all was done. But then out of a very predictable nowhere the cooper figures below the joust began their dance to celebrate the end of the plague that had once ravished Munich. When the tiny owl above the glockenspiel finally flapped his wings, as if to say “show’s over, move along”, an inexplicable cheering and clapping erupted from the crowd. My only thought on why this happened is, having suffered through the glockenspiel together the people of the Marienplatz would now not have to endure the performance again until 10am the following morning. That’s if the operator could be arsed climbing to the top of the Rathaus to torture the unfortunates below once more.

If there is one thing to be said about Australians and Germans it’s that we share a common love of beer. Munich is the beer capital of the world and Andrew and I both understood that some heavy drinking was about to ensue. We started with the Mecca of beer halls the Hoffbrauhaus.

It certainly lived up to its reputation for rowdiness and intoxication. The warm, sweet, cosy atmosphere as you wander in combined with the oom pah pah band playing leaves you in no doubt about where you have come to. The beer in its heavy 1L stein is sweet and gentle, like many of the Bavarians we have met along the way. We eventually found our way into the infamous festall, the beer hall in which Hitler announced the birth of the NSDAP and unveiled the swastika. 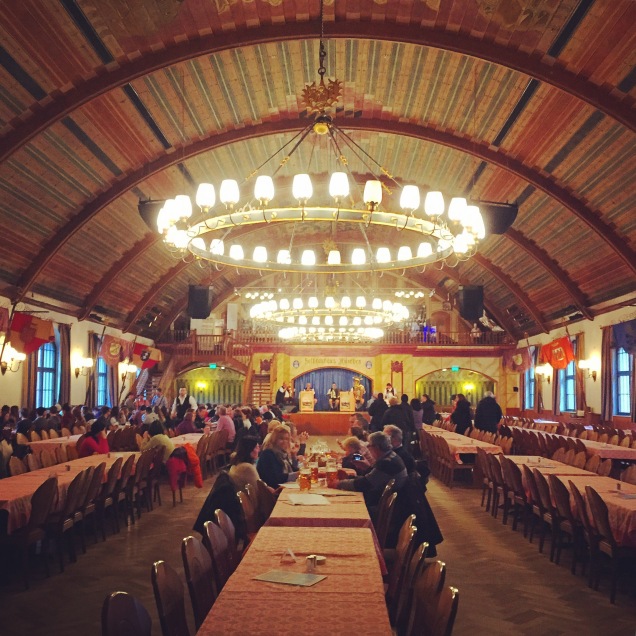 Munich for all its fun and frivolity makes no attempt to hide the scars of its 12 years of national socialism. It is a sobering thought that Munich with its romantic cathedrals, jovial beer halls and Bavarian kitsch was the birthplace of something so terrifying as the NAZI party.

In Munich we also found the quiet signs of German resistance. Munich is where a small group of university students known as The White Rose Society were beheaded for distributing Anti-NAZI pamphlets.

Also a little lane with a thin line of brass cobblestones remains as a monument to those, who seeking to avoid having to salute a Nazi shrine to the 1923 beer hall putsch, were beaten or killed for this small act of resistance. The Putsch shrine was guarded by two SS men 24hrs a day to ensure that passers by saluted as they were supposed to, an alley behind the shrine meant that people could quietly slip by without saluting, a small but important act of defiance. I was told that being aware of the alley way the Gestaupo placed a man there to catch those who used the alley more than once a day. If you got off lightly you were beaten to a pulp or sent to Dachau, if the officer was just in a bad mood you were executed on the spot. Despite all this the people of Munich continued to use the alley. A very quiet, but in my opinion, very proud and German act of defiance, lending a touch of irony to the name of the lane, which translates as “shirkers alley”.

Andrew and I did visit Dachau whilst in Munich. I won’t go into great detail aside from to say, it is a place everyone should visit. Having passed through the horror of the camp itself, when you stand inside the little low ceilinged concrete box with its fake shower heads and feel the chill that seeps into your bones, you will know that if hell had a centre you are truly standing in it.

Below are some photos I took in the camp. I offer no commentary on them, other than asking you to take a moment to look and reflect. 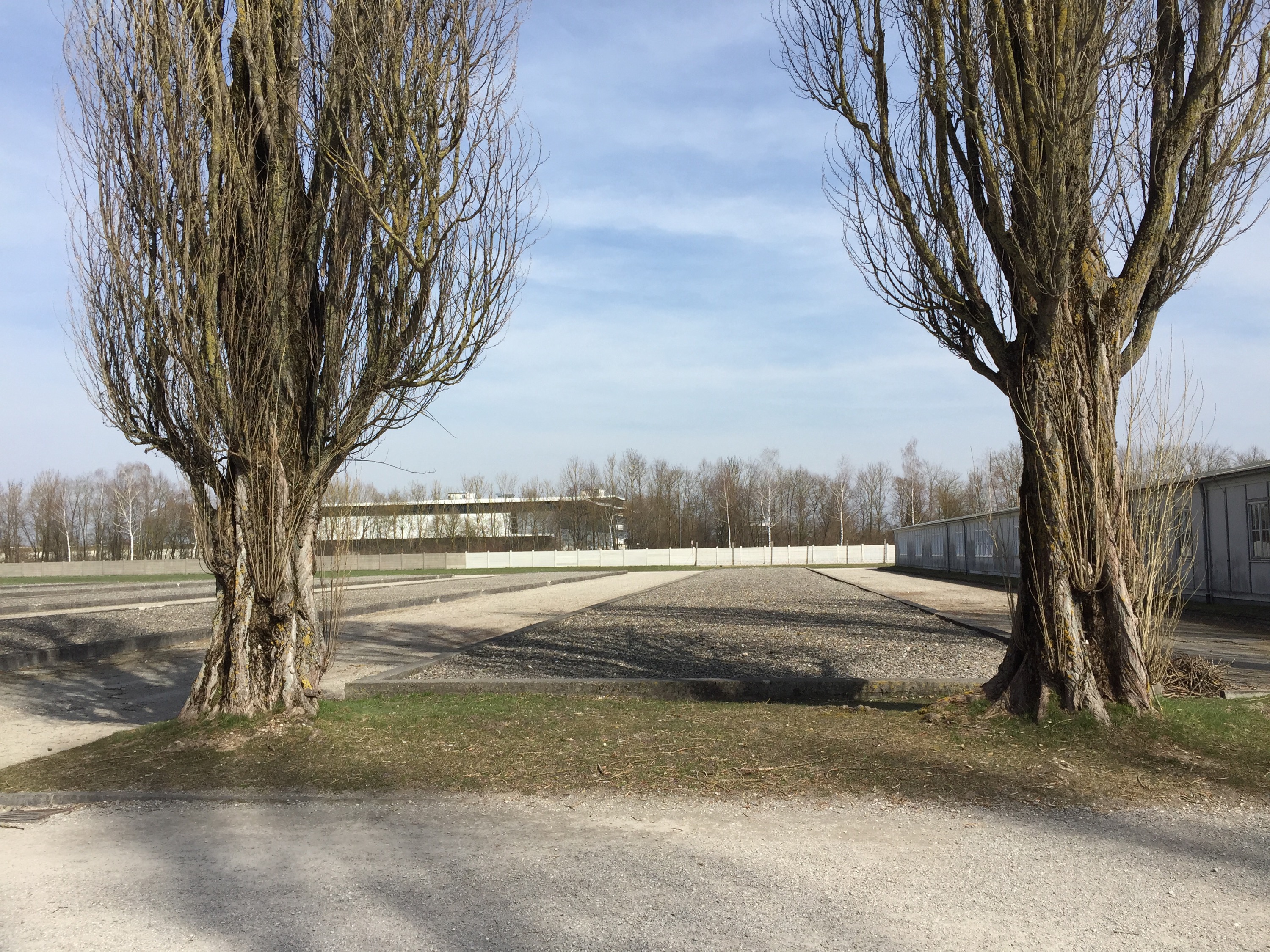 I felt changed in some unalterable way by my experience here. There was an almost “there but for the grace of God, go I” sense. Given my political viewpoints, my love of the arts and some (1/8th) Jewish ancestry it is likely that, if I were a German or invaded by Germans, somewhere between 1933 & 45, I would have found myself in such a place. I walked away feeling saddened, but so much more steadfast in my belief that all human beings must be afforded their dignity and rights.

As has been said before Germans make no effort to disguise their past, but having acknowledged it and continuing to do so, quietly and respectfully they are able to enjoy those things that make Germany great.

The people of Munich are extremely friendly. On our last night in Munich, we found ourselves drinking at the Augustiner Keller. If the Hoffbrauhaus is the Mecca of beer halls then a pint from the Augustiner Keller is the holy grail of beers! So popular that allegedly it doesn’t have a marketing department, Augustiner is seldom exported beyond German borders. Sitting beneath the  budding chestnut trees, we got talking with four of the local university students. We struck up an instant friendship as we discussed Australia and Germany and our many similarities. At which point the lights in the beer garden went to black and we found ourselves locked in!

A quick limbo under the wooden gates though and we were out! It was then decided that no trip to Munich would be complete without a visit to the old town to ride the boar outside the gaming and fisheries ministry and to pay a visit to the statue of Juliet… As in Romeo and Juliet… There is nothing stranger in Munich than the statue of a shakesperian character gifted from Verona to a German city.

Though perhaps here a point. Food, language, geography may change, but people remain the same. All capable of horrors, friendship, love and getting locked inside the Augustiner Keller. It is possible for us all to find the common ground and see our past not as something particular to Australia, Germany or Turkey, but a shared past, a communal pool from which we must drink and together seek a brighter future.

Every travel narrative should aspire to have one sublime moment, a moment when the traveller encounters something so beautiful – so vast and profound – that they are overwhelmed by the experience. The spirit soars and the mind boggles. Seeking such moments is the whole point of travel.

I admit that I was utterly cynical about Schloss Neuschwanstein. Built by the mad King Ludwig II, it has served little historical significance except as a drawcard for tourists and Disney fans. I’ve seen so many photos of it – in Spring, Summer, or Winter – that I didn’t think I could be impressed. I’m always wary of such obvious tourist traps. It’s just a castle, right?

We started the day by catching the cable car to the top of Tegelberg, a nearby mountain that serves as a launching point for hang-gliders.  After a furious (yet obligatory) snowball fight, we spent some time admiring the view. The snow-draped Alps stretched to the horizon, under a blue sky that was a checkerboard of contrails.

We descended Tegelberg and went on to Schloss Neuschwanstein. It was only as we got closer that I realised the position it commands. It straddles a hill in front of the mountains, so that no matter where you view it from – the mountains or the valley – it’s framed against a spectacular backdrop. And as we walked up to the door of the castle, I could no longer deny that I was captivated. Here was a unique piece of architecture – a kind of fairy-tale gothic – surrounded by the sublime majesty of the Bavarian Alps. Snowy peaks rise above it, a river cuts a deep gorge alongside it. I was converted.

The best views of the castle are from the nearby bridge, Marienbrücke. It was thick with tourists – the clicks of camera shutters could be heard long before we reached the bridge. And it was a battle to push through the crowd. I’m pretty sure I’m lurking in the background of a dozen photos.

We climbed a little higher than the bridge and, ignoring the numerous danger signs, emerged onto a precarious ledge that overlooked the castle. It was the best view yet, and we clung to the tree roots as we leaned over the edge. Here was the sublime in its purest form – a stunning mountain panorama, with the Alps rising high above us, coupled with the danger of falling to our deaths. I felt like a character in an Ann Radcliffe novel.

A hike along the river finished the afternoon. A hike in the Bavarian Alps on a sunny afternoon, with the last of the Winter’s snow still melting on the ground. Our trip has been so focused on history – on the two wars that have ripped this country apart – that it was good to finally appreciate the scenery.

Andrew and Garreth are travelling through Germany and Turkey in April 2015. They will be in Gallipoli to commemorate the centenary of Anzac Day.